Ok so it was brought to my attention that I have not updated this blog in a while. Looking back it is almost 2 years since the last post. I thought I would put up a quick overview of what has happened and what hasn’t.

Firstly the R1 build as previously described has been scrapped. I went through a couple of ideas but in the end decided that a building the next big bike project from an existing frame was not going to cut it. So Damian and I have decided that it will be a full custom frame power cruiser. Original idea was to go stupid and put a Nissan Leaf car motor in it with a custom controller, however I will on sell the Leaf motor I have and pick up something special for this. This build is going to take time, and we want it to be show quality, so it will take time.

On second stage is a small lightweight power build build around a Megelli frame.

This frame is super light and very attractive but will still need som significant work to make it electric. Since this photo the front and rear brakes are on and sorted and the bike is a complete rolling chassis with all the goodies.

I have acquired a unused Brammo motorcycle motor that when paired with the right controller should be able to deliver around 80kw peak with an expected weight of this bike being less than 150kg. This will be a complicated build requiring liquid cooling for both the motor and controller.

OK so with all this building going on, I really felt that I needed a bike to ride, you know like now. So when a 2014 Zero came up for sale, one I personally know because of its racing history I jumped at the chance.

The previous owner with help from Danny Ripperton have performed some really nice mods for this bike to be both street and road ready. Changes in settings gives it more power and more consistent behavior at full and low battery charge levels, higher levels of regen and increased cooling for the motor. I was able to not only pick up the bike but many extras including a trailer, extra set of rims with wet weather race tires, several sets of track tires, multiple chargers, fairings, and much much more.

I am really enjoying riding this bike nearly every day. I have tidied up a few small things and it is going for ACT roadworthy and rego next week.

The initial build will have the standard from and a very simple battery pack of A123’s.  The pack is 32S1P built using Joey Trays.  These will give us enough grunt to test the bikes acceleration and top speed. Anyone that has built up a pack for an electric vehicle knows the challenge of wiring up the battery management system and the trepidation on connecting those wires up.

There is enough energy in these batteries to literally make the connectors and wires vapourise in your hands.

I should have the pack completed by the weekend ready for a test fit.

Every bike has to have the bits that make it a bike.  The R1 was missing a few things that are needed, like the right hand rearset, front brake master cylinder and any stand middle or side.

So digging around the ebay for this stuff is always fun and I found the front brake master cylinder.

It came wrapped in plastic and fit perfectly with the Jozztek throttle.

Rearsets came next, nothing fancy but nice none the less.

It did take a bit to get the master cylinder fitted but it is all good now.  Now I will have to do something with the frame, it does not look anywhere black enough against the new rearsets.

Last but not least was a 2nd hand side stand with switch attached.  It took a lot of cleaning to get the built up grease off it.

So I need a banjo bolt or two, brake pads and a few other bike bits but not many.

One of the aims with this new build is to create a truly unique bike.  Too this end it will be built twice.  The first build to confirm the components, performance and general layout.

But with Driftech involved even the first build will have some interesting cosmetic touches. 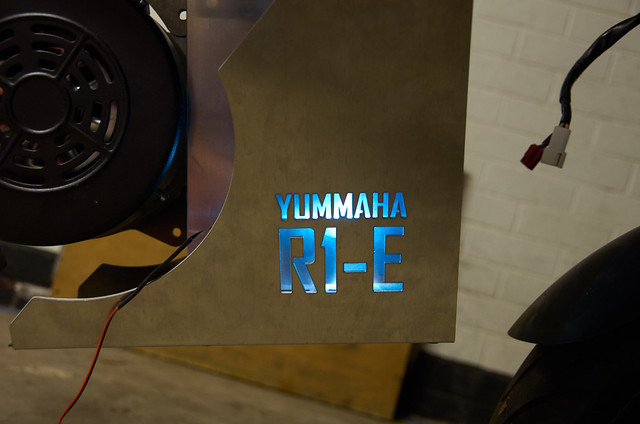 Working with Damian from Driftech over last weekend we have started to put together the test setup. 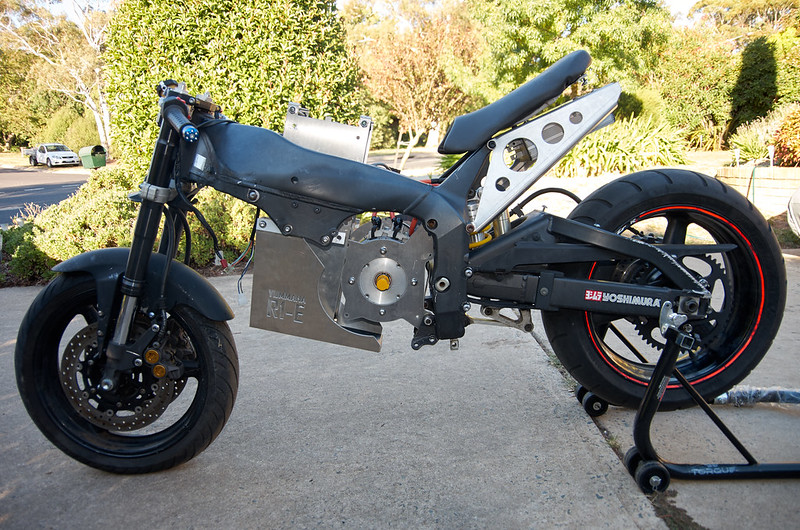 This shows the Motenergy ME0913 mounted, the short subframe with original seat, controller is under the seat mounted to the subframe, battery cradle mounted and the battery casing is in place. 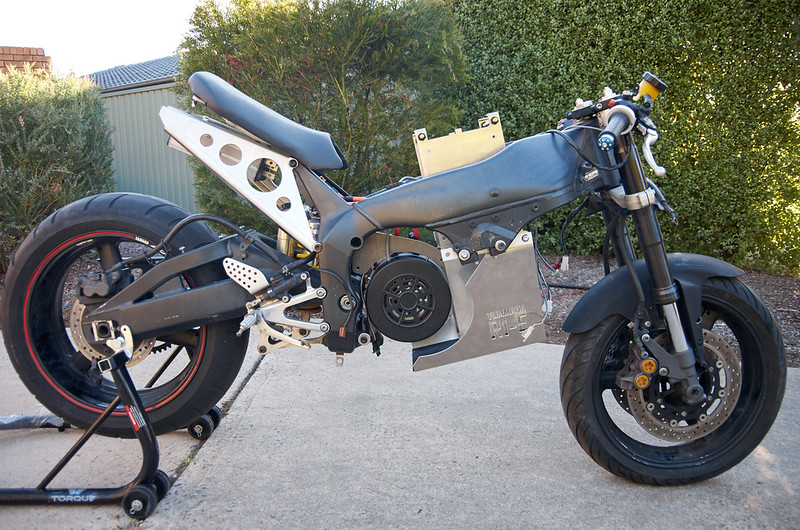 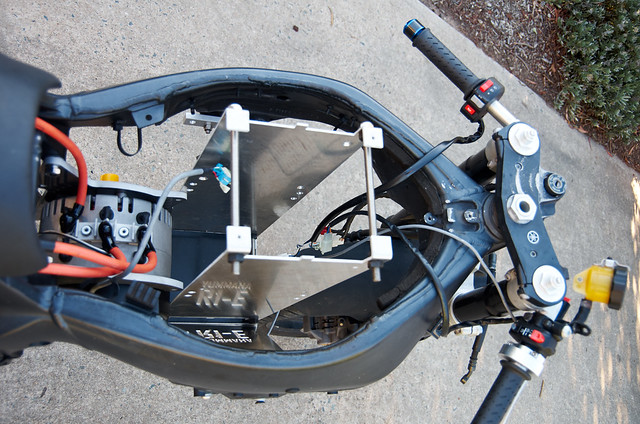 All the temporary controls are in place and you can see how much room there is in the frame.

Ok so the time has come for me to step up to the next level with the electric motorcycle builds.  The RG has been a great bike even though I keep pulling it apart to do other things. However the size of the frame limits what I can do with this build.  Little room for batteries and even less for a larger motor.

I have decided that rather than re-arrange the bike again trying to squeeze 64ah of batteries at 72 volts, I would upscale the bike instead.  This means I can now go from a 5kWh pack to a 9kWh pack and 96 volts nominal.

So here is the plan.  I have a 2002 Yamaha YZF R1 rolling chassis much like this one but without the motor and stuff.

Next get the help of an awesome fabricator, Damian Butcher from Driftech, and work out what we can do.  I was able to purchase a Motenergy ME0913 and Kelly 120v 400amp controller from Al at Electric Car Conversion Blog, so Damian and I started to look for design inspiration.  Looking around on the internet and having some discussions we decided that the build should be GULF Petroleum colours.  Not only do they look good but the irony of a defunct oil companies colours on a new electric bike is something we could not deny.

Searching for inspiration I found this awesome Ducati owned by sfarchi on ducatti.ms.

This will be at least a two stage build.  The first stage will use the existing frame and a tester battery pack to confirm the performance and weight distribution.  This stage will utilise the current frame with little or no modifications.

Stage two will see a custom build trellis frame with some custom body work.  The subframe will be aggressively short and the bike will be as naked as sfarchi’s above.

So here we are with a rolling chassis short sub frame and motor mount.

As you may have noticed progress on the bike has slowed. This is due to work pressures and a few other projects I have been helping with.

I have been helping Damian from Driftech on some of the go-kart kits and an awesome promotional Midget go-kart.

Here is some videos of the work Driftech has done.

Prototype of the go-kart conversion kit

Midget kart at a promotional day.

Ok so work, life and other stuff have got in the way and progress has been slow.

However I did get the bike up and running with a small 20ah LiPo pack for the Canberra Wheels event a couple of weeks back.  After the show I had the opportunity to take some nice photos. 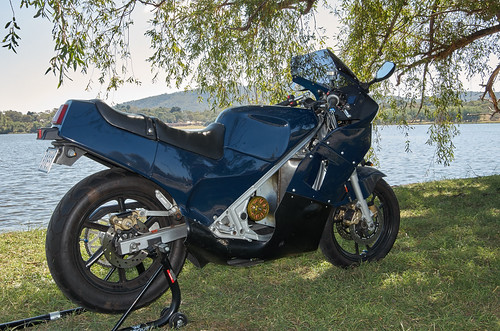 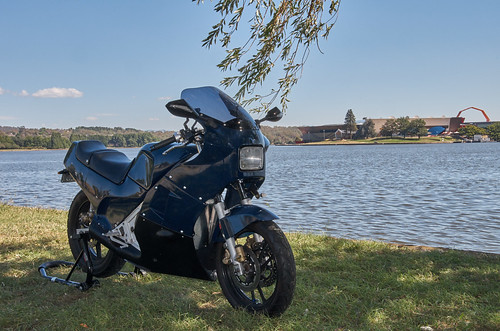 You can see the stainless steel box holding the pack under the fairing.  In this configuration the bike weighs around 110kg.

The bike is apart again so I can mount the new batteries that I have been assembling (with a lot of help) out of Kokam Cells.

Hopefully I will have some photos on the weekend on how they mount in.

Ok so back from holidays and some more work.
Thinks I have completed:
– temp sensor in motor
– dash constructed with BMS
– completed the 12v wiring
– programmed the controller
– programmed the fuse box (yep I know lookup m-Unit http://motogadget.com/en/electrics/electronic-control-box-m-unit/m-unit/m-unit-digit-tastersteuerung-u-sicherung.html.
– mounted the 20ah LiPo pack in the stainless steel box.

Took it for a quick spin round the block and it is all good. Temp cutout works (set it to 60 degrees to confirm cutoff) and the bike pulls really well.

Notes on the motor.
It is quieter than the original prototype, this is likely due to the better balancing on the can and the hall sensors being spaced accurately.
It is getting a little warm and I think I may have the timing a little retarded ( I forgot to note which direction I was spinning the motor when we positioned the halls)
It cools much faster than the prototype.

Note I have not yet connected the water cooling, hopefully a job for next weekend.

Du to the new batteries that have a very rectangular shape it is going to be hard to fit them in the bike.  I have been working on some mockups with a friend and it looks like we should be able to fit them in… with a little effort.

The packs have alloy pressure plates with ABS between the alloy and the cells.  In these images the batteries are replaced by 12mm ply (the thickness of two cells).

Here I have the larger pack (at the bottom) and the smaller pack in the approx location we are planning.

It is going to take quite a bit to mount this up properly and have room for all the other stuff required.